Since January, we’ve accomplished quite a bit. We’ve successfully launched two productivity tools that people seem to love. The vast majority of ratings are 5/5. Our userbase is growing steadily by about 2,000 people a day. And we haven’t done any marketing yet. I wanted to write about what we did right so far, and our decisions along the way.

TL;DR : Groups! has over 30,000 users, is growing by 500 a day without any advertising, is being used 6,000x a day by 2,500 users. Calendar was launched 2 weeks ago, already has over 30,000 users, is in the top 25 apps on the Mac, is being used 20,000x a day by 5,000 users. And these numbers seem to be steadily increasing. Calendar is growing by 1,500 users a day. There were several factors responsible for our success. Now that we have achieved a good level of user engagement, we will begin monetizing the apps and only then adding viral features.

Groups! for iOS was our first product. It was born out of a personal need: there was no built-in way to manage contacts on the iPhone. So we made one. We wanted it to be the most intuitive and effective group management app on the iPhone, so we integrated it with the iPhone as much as we could.

The first version was received well, but we had some hiccups along the way. When we gave it to our friends to use, it turned out that the iPhone doesn’t let you modify groups that are being synced with Exchange. This caused us to spend another week adding fallback functionality to handle groups internally if native groups didn’t work. As a result, we became the only app on the iPhone (that we know of) which can manage groups even when it was synced with exchange.

We first released a paid version for $0.99, to see what the response would be. We got around 50 people a day downloading it. When the free version came out, we got nearly 2,700 downloads on the first day, and over 13,000 downloads the following week: 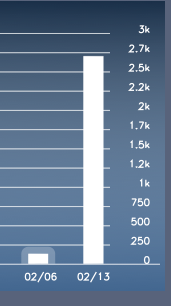 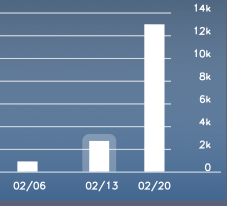 The wave of new users subsequently leveled off, was clear that free apps had the potential to become popular without any sort of advertising or PR. The main factors at work here seemed to be the app name, icon and description. The biggest factor of all, though, was the fact that users needed something to organize their contacts into groups, and when they typed “Groups” into the App Store on their iPhone, our app came up first. And it continues to do so to this day.

Pricing: Until now, we’ve maintained two apps on the store: “Groups!” and “Groups! Free”, with the latter consistently receiving ~20x as many new users every day. We briefly experimented with various pricing tiers for Groups. We found that the smaller the price, the better reviews we got. In our next update, we will combine everything into a completely free version of groups, and doing all the upgrades using in-app purchases. This is to make a better experience for the user: they first get the free app, and then make the decision to pay us money on their own time. From a business point of view, we have added several revenue streams which should increase our revenue by several multiples — when we have some data on that, I will make another post.

Usage: We have not had a chance to do any PR yet (although we did get some articles written about us, which may be contributing to the traffic), and spent $0 on advertising. Groups is currently getting a combined 500-600 new users a day.

When the user opens our app, we send a ping to our server, so we are able to track the user engagement and other trends on each of our apps. Here is a snapshot of what has been going on so far:

You can see that only 1444 people used the app today. That’s because I just took the screenshot at 1 PM today. By the way, the query I ran was:

As I write this, Groups currently hovers around the 35th position in Productivity on the iTunes App Store.

Calendar for Mac was launched two weeks ago and already has amassed 30,000 users. We did not cross-promote it from Groups. Once again, I think the biggest factor was the name: yes, it’s really called “Calendar”.

But it’s not just the name, icon and description that make it succeed. We saw a need on the Mac and we filled it. You can now access your schedule from your menu bar. Windows had a calendar in the system tray, and the Mac didn’t.

We used the same principles with Calendar, but this time, they worked even better — probably because the Mac App Store is still new, and there is less competition. We made sure the description and the screenshots indicated exactly what people should expect. The first version of Calendar was just a quick app that we put together which used the Apple APIs to interact with the built-in calendar. You had to use iCal to actually manage your events, but you could see them at a glance with our app.

Pricing: Given what we knew about Groups, we expected about 20x more users to download a free app than a $0.99 one. As the person responsible for launching the apps, this time I found myself asking two important questions. Would we rather have $100 or 2,000 users? And the more crucial question: would we rather have $10,000 or 200,000 users? The answer was clear in both cases: the users were more important. We could always upsell them later.

Usage: We now have over 30,000 people download Calendar. This is the third week that it’s been out, and it’s still in the top free Mac apps (among all apps). In fact, in the last few days it’s been inching it way upwards in the top 25: 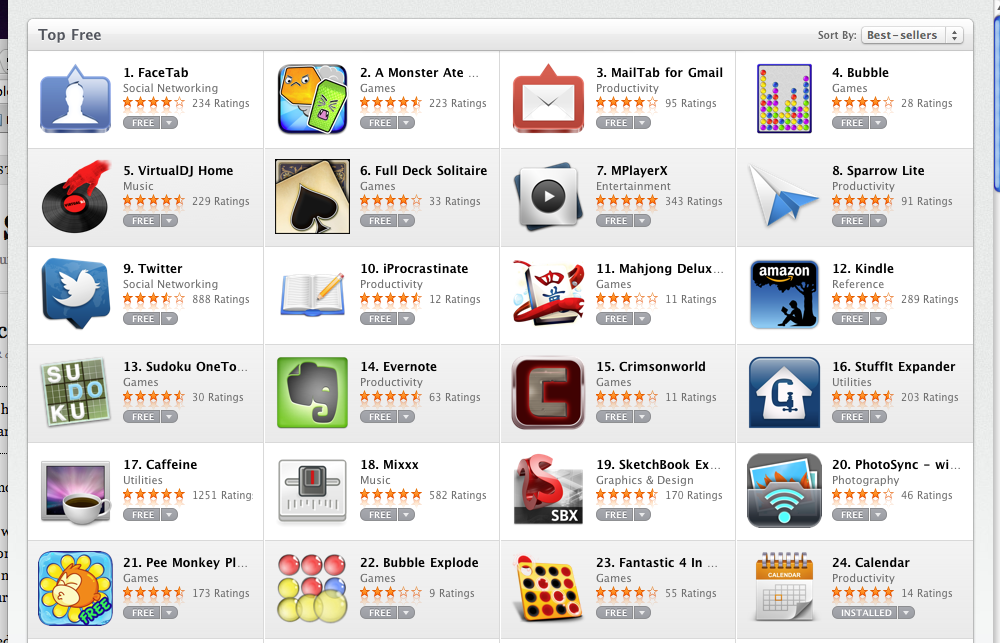 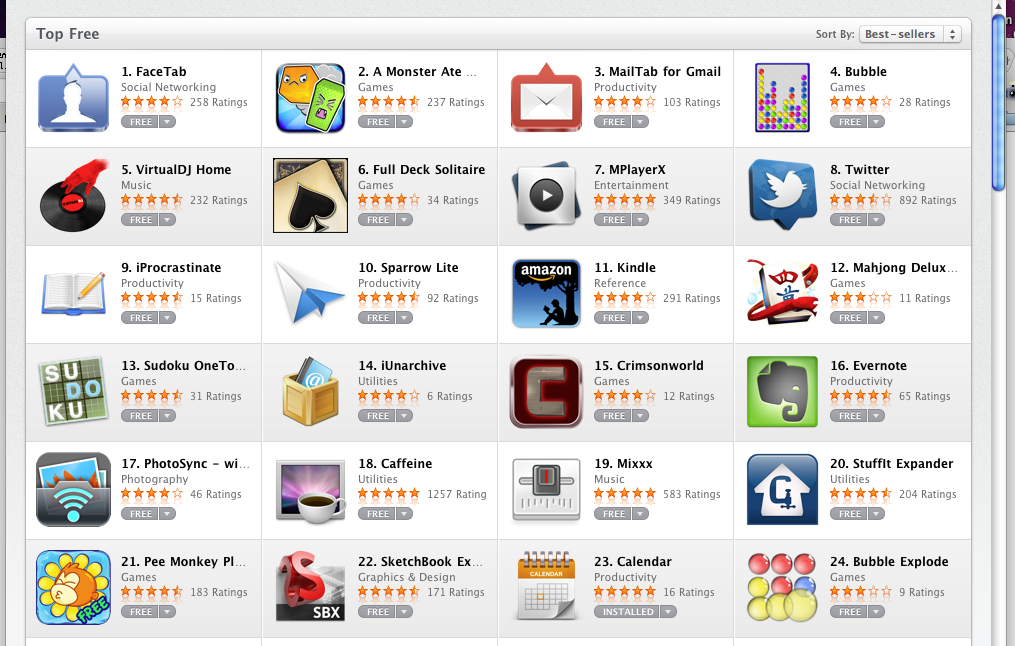 We’ll see if we can overtake Evernote

This was a few days ago.

Engagement with the app has been a source of astoundment for us. We pushed the first version out quickly and didn’t put in the ping to the server every time someone opens the calendar. When the second version finally made it out to the store, we discovered that 4,000 people were using the app a total of 20,000 times a day, and that number has been growing since.

Once again, this was taken at 1 PM, which explains why the last row’s numbers are a little more than half of the previous day’s numbers.

Feedback – People seem to love our apps, if we go by the ratings and reviews. Two factors were very important here:

Although the above are strategies to help get more people to write positive reviews, we believe our apps are actually very useful. The biggest indicator we have of this, is that — for some people with unusual environment settings, our apps didn’t work. They kept contacting us about it, asking when we will come out with a fix, and telling us that they wish they could be using the app. Even though for about 1% of our users the app was completely unusable, they did not delete it. A couple people waited for weeks. We were working hard on a new version (which among other things, fixes everyone’s issues) and we are about to release it.  But the length of time people waited for the app to be fixed encourages us in our plans. It says we’re making things people want.

What are we going to do next? Now that we have all this organic usage of our apps, we have a very nice space on which to expand and build. We spent the last two months working with our users to polish our apps, give them the features they wanted, track user engagement, and are about to start monetizing them. After we see some success from the monetization efforts, we will move on to adding viral features and combining the apps into one platform. After that, we will probably be ready to raise more money.